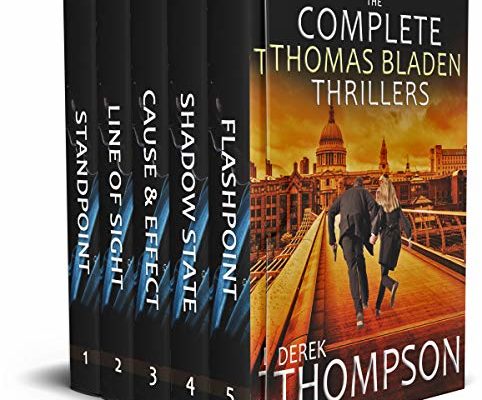 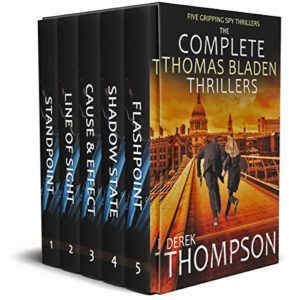 GET THE COMPLETE BEST-SELLING SERIES IN THIS BRILLIANT BOX SET. YOU GET *FIVE* THRILLERS FULL OF TWISTS AND EDGE OF YOUR SEAT TENSION.

What people are saying about the Thomas Bladen books

“Kept me up far too late at night.” Gemma Donnelly

“One of the best spy thrillers I’ve read in a long time.” Lacancan

“This series of books simply gets better and better.” DuchessSarah

IN THIS FIVE-BOOK BOX SET:

BOOK 1: STANDPOINT Follow Thomas Bladen’s heart-stopping journey to uncover the truth. It all starts when during a routine operation he sees a shooting which will expose a world of corruption and danger. When his on-again, off-again girlfriend Miranda is drawn into the conspiracy, Thomas must decide who he can trust to help him save her life.

BOOK 2: LINE OF SIGHT When Amy Johanson is killed during a weapons test, Thomas and his partner Karl are determined to get to the bottom of what happened. But they are thwarted by dangerous and powerful forces. Miranda and her family are once again put in harm’s way. Can Thomas get justice for Amy while navigating the shifting sands of espionage, big business, and the mystery of Karl’s past?

BOOK 3: CAUSE & EFFECT Just when Thomas thought things had settled down, Miranda’s father calls in a favour. Thomas must investigate an attack on the loved one of a drug dealer. As he delves deeper he finds out the truth about Miranda’s past and his investigation will take him to the heart of the shadow state and endanger everyone Thomas cares about.

BOOK 4: SHADOW STATE A car is being stolen. In the back seat is a baby. But Thomas Bladen is watching. He has a split-second to decide what to do next. His intervention leads him on a deadly trail that ends with a dangerous group known as the Shadow State. Their toxic reach extends further than Thomas ever could have imagined. Thomas and Karl must face off against the murderous power behind this organization if they are to bring the perpetrators to justice. But will doing so cost them their lives?

BOOK 5: FLASHPOINT As London security services scramble to deal with the aftermath of a terror attack, Thomas Bladen is in deep trouble. His department has been taken over by MI5, his girlfriend’s gone, and he’s “lost” a handgun during surveillance of a high-profile politician. Then two of his senior colleagues disappear. Who’s taken them and why? Bladen’s search for answers is blocked at every turn. In a thrilling conclusion, Bladen must face his doubts and put his life at risk against forces whose allegiance is unclear. This is the reckoning.

If you like Mark Dawson, Rob Sinclair, Lee Child, or Vince Flynn you’ll be gripped by these fast-paced thrillers.

Don’t miss out on this acclaimed series of thrillers! YOU GET ALL FIVE OF THE ABOVE BOOKS IN THIS EDITION