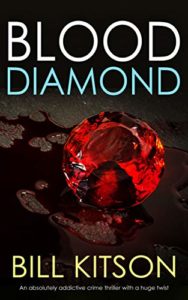 Detective Mike Nash thought that moving back to Yorkshire from London would give him a quieter life. Little did he know . . .

“Don’t read it on a bus, you’ll miss your stop.” Scarborough Evening News

1986: A consignment of illicit diamonds en route to London vanishes, along with the couriers. It isn’t long before East End gangster Max Perry is found dead, having suffered horrific torture.

Present Day: Max’s nephew, Ray, was sentenced to life in prison for taking his revenge. He is released after twenty-five years and heads for Helmsdale.

A NAIL-BITING CRIME MYSTERY WITH A HUGE TWIST
But before he can get there, Ray is the victim of a hit-and-run. DI Mike Nash is convinced it was no accident.

Then a garage mechanic is found tied up and bludgeoned to death. Nash discovers a link to an unidentified skeleton found years ago in Helmsdale woodland.

How do crimes committed long ago in London connect to the current wave of violence? As the body count rises, the detectives struggle to keep pace with those who would prefer the truth to remain dead and buried.

MIKE NASH
A highly talented detective, he was a rising star in the Metropolitan Police. Following a particularly gruesome case involving a sadistic serial killer, Nash turns down the chance of promotion and heads back to his native county of Yorkshire. He hopes that returning to his roots will bring peace of mind. However, although the pace of life seems gentler, the crimes prove no less horrific. His skills are tested to the limit by a series of violent crimes that threaten to ruin his plans for a more relaxed lifestyle. Nor is his secret ambition to settle down made any easier by his one weakness, a seemingly unquenchable thirst for female company. That is, until . . .?

LOCATION
The books are set in a fictional rural North Yorkshire with a scattering of market towns, many small villages and countryside that changes from high moorland with dramatic crags, mountain tarns and sparse vegetation, to the gentler, lush agricultural land lower down the valley that is bisected by the river Helm. The town of Helmsdale is where Mike Nash and his team are based, in a sub-division of their headquarters in the larger town of Netherdale. Further to the west is Bishopton, also part of the hub our detectives cover.

Book 1 – What Lies Beneath

Two skeletons are discovered in Lamentation Tarn, a mountain lake.  Talented detective Mike Nash and his team have little evidence with which to work, until a surprising discovery prompts them to contact law enforcement agencies in Eastern Europe.  A joint task force is formed to uncover a criminal network involved in prostitution, drugs, and human trafficking, but Nash’s preoccupation with internal politics, as well as with an attractive Russian detective, proves to be a distraction.

HOW DO YOU SOLVE A CRIME WHEN THERE’S NO EVIDENCE ONE HAS BEEN COMMITTED?  Sarah Kelly goes for a night out at a club. She leaves around 2 a.m. No one sees her again.  Detective Mike Nash has nothing to go on, until a chance remark causes him to look deeper into other cases. Young women who have vanished without trace.
Nash spots chilling similarities:  NO BODIES, NO WITNESSES, ALL DISAPPEARANCES EXPLAINED AWAY.
He needs to find a solution and fast as two more women vanish, making it personal and potentially fatal. Both for Nash and for the women who have disappeared.

Gary Vickers killed his lover’s daughter. There was overwhelming evidence of his guilt. He is now due for release from prison.  Against all advice, he insists on returning to Helmsdale, where Detective Mike Nash must protect him.  But Nash has other, more pressing worries . . . With extremist politicians fanning racial hatred and provoking attacks on migrant workers, Nash has to prevent an explosive situation from boiling over into civil unrest.  SHOULD YOU PROTECT SOMEONE CONVICTED OF AN UNSPEAKABLE CRIME?  Nash’s small team of detectives has little time to spare for convicted murderer Vickers.  But as Nash becomes acquainted with the facts, doubts start to grow about Vickers’ conviction.  Proving him innocent will be difficult enough . . . but keeping him alive until they find the truth may well be impossible.

DETECTIVE MIKE NASH IS GOING TO HAVE A VERY UNMERRY CHRISTMAS.  In an ordinary terraced house, a family die. Poisoned by carbon monoxide.  Then comes a suspicious house fire, with more bodies at the charred scene.  A drug addict is murdered in the most bizarre medieval manner.  And a scientist’s daughter disappears.
THERE’S A KILLER ON THE LOOSE THIS HOLIDAY SEASON.  DI Mike Nash follows the leads of these disparate crimes. One very dangerous person seems intent on revenge.  CAN HE STOP A SERIAL KILLER BEFORE ANYONE ELSE PAYS THE ULTIMATE PRICE?

A KILLER WHO SLASHES WOMEN’S THROATS.  A FORESTER TRYING TO PUT HIS PAST BEHIND HIM. Andrew Myers was wrongly convicted of killing his wife by slashing her throat. Finally freed, but not exonerated, he just wants a quiet life far from where the tragedy happened. He goes to work as a forester on an isolated estate in Yorkshire. BUT THEN A KILLER WITH THE SAME TRADEMARK STARTS CLAIMING NEW VICTIMS, AND IN THE SAME AREA WHERE ANDREW HAS MOVED. Andrew has a terrible chainsaw accident while cutting trees. He manages to staunch the bleeding while he drives himself to hospital. His erratic control of his car attracts a policewoman, Lisa Andrews, to stop and help him. But she soon finds out there is more to him than just a hermit-like forester living in the woods. Is he a callous murderer? Is he now taking a terrible revenge on those who wronged him? Or, does the truth lie elsewhere? With resources decimated by a flu epidemic, Detective Mike Nash is forced to use unorthodox tactics to expose a web of corruption and deceit spanning the years. CAN MIKE NASH STOP A SERIAL KILLER OR HAS HE GOT THE MURDERER IN HIS SIGHTS ALREADY? A BREATH-TAKING CRIME THRILLER PERFECT FOR FANS OF IAN RANKIN, JD KIRK, DS BUTLER or PETER ROBINSON.

Book 6 – Alone with a Killer

ALONE IN A COTTAGE A STORM COMING IN A SERIAL KILLER ON THE LOOSE Alone in an isolated Yorkshire cottage, Vanda Dawson waits for her sister Jo to come keep her company. Her husband Brian is away on holiday. Outside, as storms lash the country, Jo struggles to reach the house. But she finds it deserted and in darkness. WHERE HAS VANDA GONE? With Mike Nash on leave, Detective Sergeant Clara Mironova leads the investigation. The missing woman’s husband is also unaccounted for. Is he responsible, or has she been abducted by the sadistic serial killer nicknamed The Cremator? A SERIAL KILLER WHO TORTURES AND BURNS HIS VICTIMS ALIVE Before Nash’s return, a security van disappears along with its two-man crew. Further violent crimes are reported and it becomes apparent that nothing is as it seems and no one is quite what they appear to be.

More books coming soon, join the Joffe Books mailing list to be the first to hear about them!