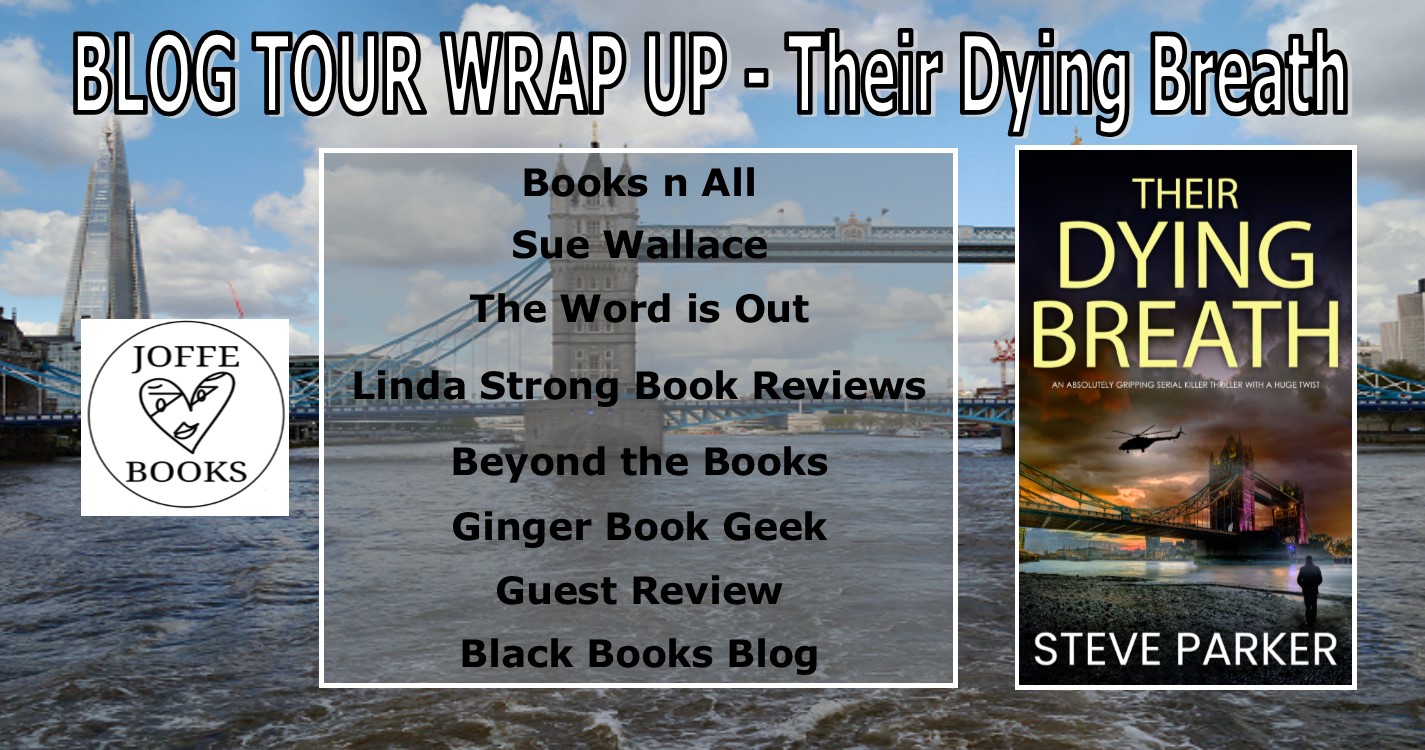 Steve Parker, Joffe Books and I would like to say a massive THANK YOU to everyone who helped with the launch of THEIR DYING BREATH.  You guys are absolutely awesome and we cant thank you enough.

A very good read with good characters. Patterson and Clocks are my favourite characters. Looking forward to the next book.

Clocks and Paterson make a great team. There is a lot of humorous banter between the two, making the book fun at the same time as tackling deadly serious crimes. They have a fantastic relationship built on the shared traumatic events that they have somehow lived through in the first four stories in this series and that have shaped Paterson and Clocks into the characters they are now.

This is well written with suspense starting with the very first page. The main characters are the stars of the show, especially Clocks, who sees everything with a sense of humor. and mostly a bit of sarcasm which he has mastered.
Beyond the Books https://sharonbeyondthebooks.wordpress.com/2020/02/15/steve-parker-their-dying-breath/ Steve Parker, yet again, has written a brilliantly well informed, twisted book! It’s action packed, fast paced and tons of weirdly sarcastic humour between the two detectives, which brings the laughs in between the dark moments. They are a fantastic duo that work well together!

‘Their Dying Breath’ is brilliantly written but then I wouldn’t expect anything else from Steve Parker.  The story hits the ground running and maintains the fast pace throughout.

I highly recommend this great book and I look forward to reading many more by this hugely talented author.

I was straight into this murder with added breathtakingly dynamic action all the way in. Paterson and Clock Ray and Johny are such a delight to read. You will feel so engrossed from start to finish. The author has hit the button again an exceptional read I cannot say anymore than pick it up and read you won’t be disappointed.

YOU CAN RUN BUT YOU CAN’T HIDE. YOU CAN NEVER HIDE.  Albert Tanner, vicious psychopath and burner of men, is in the USA with unfinished business  Detective Superintendent Ray Paterson and Detective Inspector Johnny Clocks must find him first.  Their task is straightforward: hunt Tanner down and bring him home. But a few explosions, an assassin and a dead child change everything.  Dragged into a sordid world of high class sex parties they discover an Albert Tanner they never knew existed.  Then a child is snatched from her own bed and Tanner wants to do a deal. However the price is far too high. Paterson and Clocks realise they have no choice but to hunt Tanner down thei