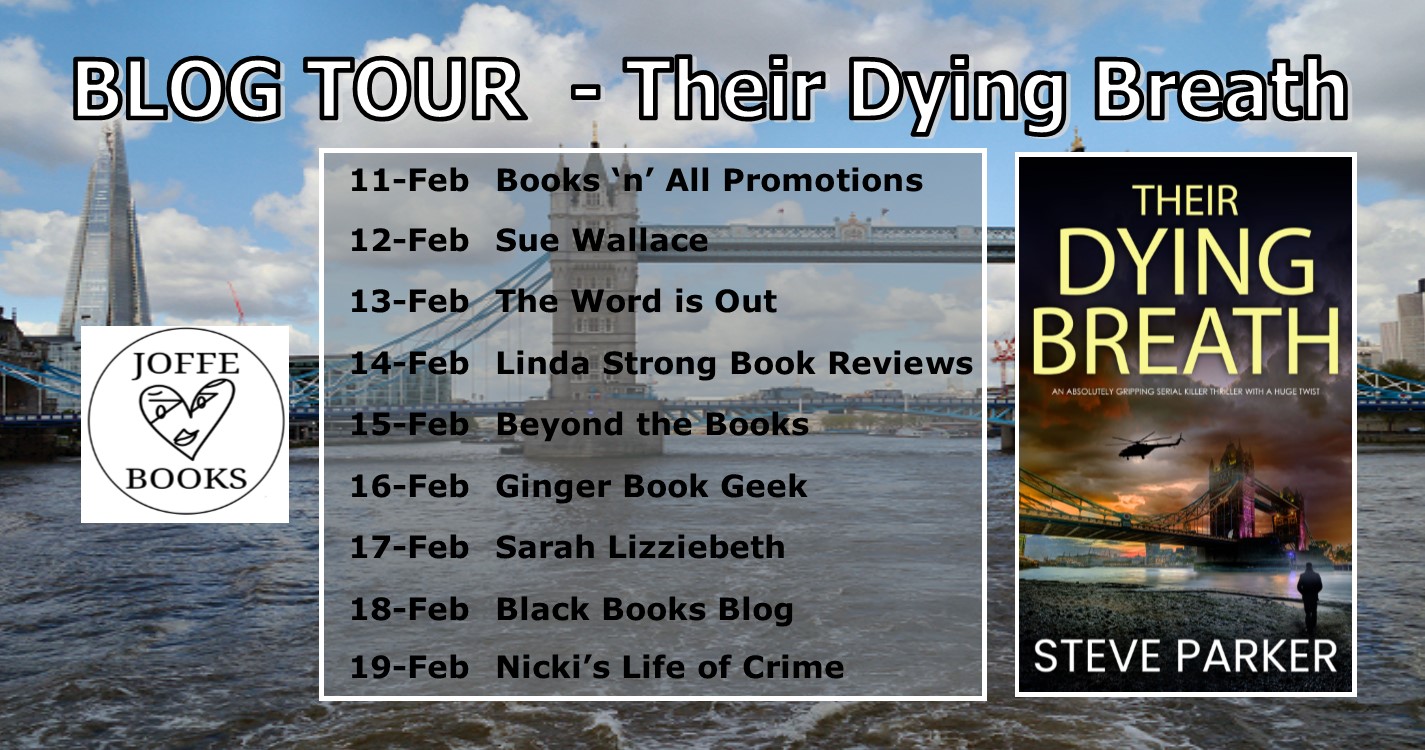 Today I am handing over my Blog to Sarah Lizziebeth so that she can share her review as part of the  Blog Tour for this brilliant new release to the Detectives Paterson and Clocks series.  THEIR DYING BREATH is book 5 and is an adrenaline pumping read that will keep the pages turning from the prologue to the edge of your seat ending.

I am so impressed with this author’s writing – what a brilliant story! It’s cleverly thought out and totally compelling. I love, love, LOVED it!!!
I really enjoy this genre and in all of my favourite genres I have my go-to authors. Steve Parker is now one of those authors.
My heart rate was up and down like a yo-yo, and no way could I have read this book in public – due to me crying with laughter! I love Ray Paterson and Johnny Clocks and the good-humoured banter that bounces back and forth between them, but Johnny alone, I just adore him! I loved the humour that popped up throughout the story and the fact that the serious, sensitive and the gory parts were so believable with all the elements perfectly balanced and so it never read sloppy, as if it was slat together as sadly some books are.
After reading the prologue and the first couple of chapters, I was looking forward to finding out how it would all tie-in; also another investigation is underway!.. I felt intrigued from beginning to end. It really was full to the brim with action and a race-against-the-clock!
I feel all the characters also well written and I’m hoping that there will be more to come in this fabulous series and I would like to read more about the flat characters who work under the magnificent duo!
Another plus for me was that I found the descriptions regarding the Police procedures and the lingo extremely interesting and I felt it was just enough to provide what was needed for us the reader.
I highly recommend this great book and I look forward to reading many more by this hugely talented author.
My thanks go to Books ‘n’ All Promotions and Joffe books via NetGalley

YOU CAN RUN BUT YOU CAN’T HIDE. YOU CAN NEVER HIDE.  Albert Tanner, vicious psychopath and burner of men, is in the USA with unfinished business  Detective Superintendent Ray Paterson and Detective Inspector Johnny Clocks must find him first.  Their task is straightforward: hunt Tanner down and bring him home. But a few explosions, an assassin and a dead child change everything.  Dragged into a sordid world of high class sex parties they discover an Albert Tanner they never knew existed.  Then a child is snatched from her own bed and Tanner wants to do a deal. However the price is far too high. Paterson and Clocks realise they have no choice but to hunt Tanner down their own w