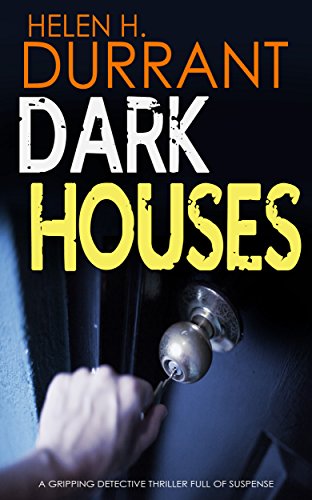 A young woman is found brutally murdered in an empty house
Detective Stephen Greco and his team must piece together her life as quickly as possible. Within twenty-four hours there is another horrific murder using the same method. The detectives realise that the victims are random but the locations are not. The killer is more concerned with finding the right house – somewhere he won’t be disturbed as he pursues his evil plan.

When a man walks into the station and confesses, it looks like the case is closed. But Greco’s not convinced and soon he’ll be fighting to save the woman who’s most important to him in a stunningly tense and emotional conclusion.

Can Greco keep himself and his team under control as the criminal gets personal?

DARK HOUSES is the second book in a new series of detective thrillers featuring D.I. Greco. Stephen Greco has moved to Oldston after his wife divorced him. He doesn’t like the place much but he wants to stay close to their daughter, Matilda. He is a meticulous policeman with a touch of O.C.D. Easy to admire, but difficult to like.

The series is set in the fictional industrial northern English town of Oldston.

I have a list of authors whose books I can pick up to read knowing that I have a few hours of gripping, adrenaline pumping entertainment in store and Helen Durrant is pretty high up that list.  So when I was in danger of losing my reading mojo I went in search of her back list and downloaded Dark Houses.  Yes, okay I hold my hands up I meant to download the first in the series which is Dark Murder but no matter they work perfectly as stand alone.

In an empty house the body of a pretty girl is discovered.  Rape, torture the victim had horrific injuries and Greco has his work cut out.  The killer is forensically aware so there is no evidence it is on a low income estate so everyone ‘seen nothing, heard nothing’  Add into the mix a schizophrenic young man and things are starting to get really complicated.

Greco is trying to rebuild his relationship with his ex wife while working his way through his OCD issues and is feeling a little insecure.  Speedy is disillusioned with life and work and Grace has a crush on Greco.  Can the team clear their heads enough to pick up and run with the tiny bits of clues that are available before more young women die?

There are many twists and turns as the reader is taken on a roller coaster ride full of edge-of-your-seat suspense all the way to an ending that is mind blowing.

Another absolutely fantastic read from a very talented author.