Today I am thrilled to be kicking off the #BlogTour for THE BLUESMAN by Stewart Giles.  This is book 19 in the brilliant Detective Jason Smith series and is an absolutely awesome read that is perfect for anyone who likes crime fiction. 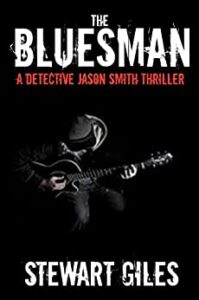 Smith isn’t In a good place.

He’s still in shock after the worst case of his career. He has problems on the home front, and he’s just been told to take some time off.

Things couldn’t get much worse.

They’re about to get much, much worse.

Smith gets a phone call. When a stranger asks for his help, he doesn’t know what to do. An old friend has gone missing and the parting words of the woman on the phone chill Smith to the bone.

He’s sold his soul to The Bluesman.

Smith has some time off. But as he digs deeper into this mystery Bluesman he starts to wonder about everything else in his life.

The Bluesman is not what he seems, and he’s going to change Smith’s life forever.

What readers are saying about The Bluesman:

I loved this, my favourite Smith book to date. An epic masterpiece, reminiscent of a modern day Faust, quite extraordinary and remarkable as it features iconic legends. Its double trouble right from the outset. A brilliant concept, masterfully done. – Carol

THE BLUESMAN strikes terror in the hearts of men and me. It seems to just a puzzling mystery….but not for long. Unconscionable acts, spell-binding, harrowing conundrum, and hair-raising suspense will keep you riveted and on the edge of your seat until the surprising finish you’ll never see coming. – Lena

A very suspenseful pageturner as I expect from this series.  The adrenaline starts pumping from the first page and continues to the absolutely shocking ending. 5 star read perfect for anyone who loves crime fiction. – Reading Addict

A new addition to the Detective Jason Smith series and as usual another absolutely gripping pageturner I was unable to put down.

The story picks up from the end of the previous book with Smith in trouble.  That is nothing new he is usually in trouble but this time it could be the end of his career as a detective.  However, his luck holds out he keeps his job but he needs to take 2 weeks leave.  What is he going to do with his time?  While he is still pondering this he gets a call to say a friend of his has gone missing.  With nothing else to do and a friend in need Smith decides to find out what is going on.  What did the caller mean by ‘he has sold his soul to the Bluesman’.

As Smith starts digging around it soon becomes clear that evil is around the streets of York of a kind never seen before.  Smith and the people he loves could really be in trouble this time.  Will this be the case that finally breaks Jason Smith?

Adrenaline pumping from the first page to the last, packed full of red herrings and more twists and turns than a roller coaster I think this may be my favourite book of the series.  And the ending – WOW I really didn’t see that coming.

Woven into the story are the background stories Lucy’s adoption and the grief being suffered by the team at the loss of Yang Chu.  I also love how the team members are developing and supporting each other and how the dynamics have changed as new members join.

An absolutely stunning read and well worth the 5 stars.

The Detective Jason Smith series continues to grow. I also have another series featuring an Irish detective who relocated to Guernsey, the Detective Liam O’Reilly series. There are also 3 stand alone novels.