Today I am closing the Blog Tour for CHRISTMAS ON THE ISLAND (Detective Liam O’Reilly #6) by Stewart Giles.

CHRISTMAS ON THE ISLAND 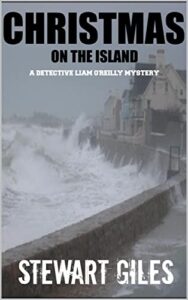 CHRISTMAS:
The silly season.
Or, the suicide season?

A string of suicides on the island arouses Detective Liam O’Reilly’s suspicions. He understands that the suicide rate tends to increase during the festive season, but the ways in which these people have chosen to end their lives doesn’t feel right.

As O’Reilly and his team dig deeper they soon learn there is much more to these apparent suicides than they initially thought and O’Reilly realises there is a seriously damaged mind on the loose.

Dubbed the suicide killer by the press, this madman will stop at nothing to get his depraved message across and O’Reilly is the only one who can put an end to his killing spree.

This festive season is one the Irish detective will never forget.

What readers are saying about Christmas on the Island
An interesting mystery which kept me guessing. Four apparent suicides at Christmas time on Guernsey a peaceful, safe island! Red herrings, twists and turns galore make for a good enjoyable read. – Carol
The pages turn so very easily- to me the skill of a brilliant writer and the grey matter is kept active as initially there is little to go on as to whom the perpetrator may be. I fell for the curve ball and didn’t see where this was going- clever. A brilliantly thought out, cleverly told page turning story. What more could a reader ask for ? – Misfits Farm
This is a gripping read and very hard to put down. Fast paced and the story flows really well and all makes sense. – Maureen
An insidious, baffling conundrum is pulse-pounding, edge of your seat trepidation. The more perplexing and complicated it becomes suspense rises leading to a surprising dynamite conclusion. – Lena

Detective Liam O’Reilly is back.  This is book 6 in the series but they work perfectly as stand-alone.

Christmas is approaching and all is quiet on the crime front but when Liam O’Reilly is around it is unlikely to stay quiet for long.  The call comes in to a suicide and O’Reilly goes to check it out.  It looks cut and dried but why would a happily married Captain commit suicide?  O’Reilly is determined to find out.  When the call comes in of another suicide O’Reilly’s suspicious mind is ringing bells all over the place.  It is a small Island and the festive season 2 suicides has to be more than coincidence.  Doesn’t it?

Katie Owen is called in from leave to help and all leave is cancelled O’Reilly wants answers and he is going to get them before anyone gets their Christmas dinner.

A very intriguing story packed with twists and turns and the humour I expect from Stewart Giles running through the middle.

As usual I had my theory on who and why only to find it was a red herring and the actual was totally mind blowingly unexpected.

An absolutely brilliant read perfect for anyone who loves Crime Fiction.