Today I am opening the Blog Tour for a stunning new addition to the Detective Liam O’Reilly series by Stewart Giles.  REVENGE ON THE ISLAND is book 5 but they work perfectly as stand alone. 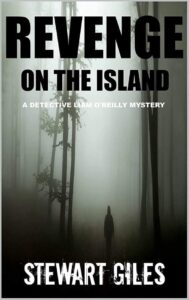 Revenge on the Island: A compelling mystery with a dark twist (DI Liam O’Reilly mysteries Book 5)

How do you solve a murder when you’re the number one suspect?

Fifteen years ago Patrick Finney was sentenced to life for the brutal murders of four women. It was one of the most high-profile cases in Irish history and one that defined Detective Inspector Liam O’Reilly’s career. O’Reilly was instrumental in bringing Finney down.

Now Finney has escaped from a high-security prison and he’s not content to stay on the run.

He wants revenge and he’s prepared to stop at nothing to get it.

Abandoned by the very people he’s employed by O’Reilly finds himself in a predicament that leaves him running out of options. There is only one man who can help him. But it’s a man he vowed he would never contact again, and the consequences of his association with this phantom could be far worse than O’Reilly could ever imagine.

When the hunter becomes the hunted the rules of the game have to change.

This is a chilling mystery that O’Reilly will never forget.

WHAT READERS ARE SAYING ABOUT REVENGE ON THE ISLAND

An action packed, edge of your seat, heart-racing suspense keeps the pages flying by until the dynamite explosive finish that you won’t see coming. – Lena

WOW I could not put this book down once I started, it has got it’s full on case of revenge and how it was all going to come to a high was impossible, but this guy never gives up and boom it’s one cracking read. – Booklover Bev

A great read and very hard to put down. – Maureen

Absolutely brilliant! The Island series is quite extraordinary and really stands out for me. This edition [book 5] in the series is extremely poignant, as we’ve already got to know and love all the characters and their backgrounds. However it all comes together in a horrific way. – Carol

Detective Liam O’Reilly is back in book 5 of this brilliant series.  The books do work perfectly as stand alone.

Life is pretty quiet on the Island which for Liam O’Reilly usually means things are going to change and I wasn’t wrong.  While wrapping up the current case Liam finds his past has come back to haunt him in the shape of a sadistic murderer he caught 15 years ago, a murderer who is out for revenge with nothing to lose.

When O’Reilly stumbles accross a body he soon finds himself number 1 suspect for a murder he didn’t commit being investigated by a DCI also out for revenge.

In this fast paced adrenaline pumping story O’Reilly realises that the peaceful life on Guernsey is under serious threat unless he can prove his innocence and track down the murderer but to do so he may have to sell his soul to the devil.

Wow!  Stewart has done it again.  Another great story and despite the seriousness of O’Reilly’s predicament there are still many places where the humour made me smile.

Adrenaline pumping suspense keeps the pages turning in this brilliant story.  Another great read and looking forward to more in this series.

Book 3 – Fear on the Island

Book 4 – Malice on the Island

Book 5 – Revenge on the Island