Today I am happy to be sharing my review of MALICE ON THE ISLAND as part of the Book Tour. 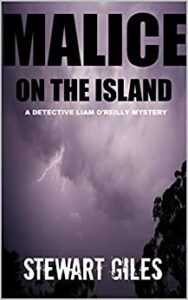 Nobody knows when it first started.

The tranquil island of Guernsey is suddenly besieged by a wave of malice. Restaurants are getting set alight, houses are being sprayed with paint and friends are no longer sure if their neighbours are who they thought they were.

When a woman is found dead, covered head to toe in paint outside a house covered in identical paint Detective Liam O’Reilly is brought into the midst. O’Reilly soon realises this is much more than a simple case of murder. And when more bodies are found O’Reilly starts to wonder if he made the right decision in coming to the Island in the first place.

Two families share a sinister secret and the repercussions of this are more deadly than O’Reilly could have ever imagined.

This is a crime mystery you won’t want to miss.

WHAT READERS ARE SAYING ABOUT MALICE ON THE ISLAND
Its 5 stars from me. I am no writing expert but I enjoyed the new format of no prologue and thought it: Reminiscent of a modern day Shakespearean tragedy. I loved it.–Carol

This series just keeps getting better and better. The story pulls you in from the start and makes it hard to put down. The characters are developing nicely and the plot is fast-paced and gripping. If you enjoy detective crime thrillers I’d highly recommend this series set on the island of Guernsey. – Kirsty

“Crime on the previously quiet island of Guernsey has heated up substantially since Detective Inspector Liam O’Reilly moved there to enjoy the quieter life. This case is particularly malicious. O’Reilly’s daughter Assumpta plays a key role with her investigative skills and instinct. Perhaps their partnership is going to become central to the solving of future crimes on the Island?”- Alison

Another brilliant catch up with the grumpy Irish detective.  You have to love DI Liam O’Reilly he moved to Guernsey for a quieter life but found he had to hit the ground running as the dead bodies kept on coming.

In this story we have 2 families with a feud going back generations.  A fire at the Simon’s restaurant followed by the discovery of the body of Micheal Simon’s fiance and O’Reilly has his work cut out trying to uncover whatever it is the 2 families are hiding.  The body count continues to rise and what is the black paint all about?

I really enjoyed reading this book.  I was gripped from the early pages and it didn’t let go.  The intrigue mounts page by page as the reader is taunted with a family mystery that refuses to reveal itself.  The big reveal delivered in spades with a shocking revelations I definitely was not expecting.  Fantastic read.

The characters continue to develop.  In the first 2 books we met the grumpy Liam he had lost his wife and was running from the bad guys forcing him to leave his daughter behind in Ireland.  As the series has progressed we have seen a softening of this complex character as he settles in to his new life.  His daughter moving to Guernsey helped with this and I love what Assumpta brings to the stories.  Her relationship with Andy Stone is one O’Reilly definitely disapproves of and the banter between father and daughter add much needed humour (not forgetting O’Reilly’s love/hate relationship with Bram the cat).

Adrenaline pumping suspense, a massive helping of intrigue with a little love and humour woven in.  A fantastic read.  More please Stewart.

The Detective Jason Smith series continues to grow and there are now 14 books including the introduction: Phobia. In addition I have an new series featuring an Irish detective who relocated to Guernsey.  The first 4 books in the Detective Liam O’Reilly series are now available.