I am thrilled to be sharing my review of this brilliant new release by Mark Tilbury. LAST ONE TO SEE HER is an edge of your seat, adrenaline pumping psychological thriller and I loved every page.

LAST ONE TO SEE HER 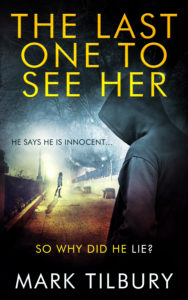 He says he is innocent. So why did he lie?

Mathew Hillock was the last person to see eleven-year-old Jodie Willis alive. When her dead body turns up four days later in his garden shed, the police think he’s guilty of her murder. So do most people in the town. But there’s no DNA evidence to link him to the crime.

Battling the weight of public opinion and mental illness due to a childhood head trauma, he sinks into a deep depression.

Can Mathew do what the police failed to do and find evidence linking the real killer to the crime?

The Last One to See Her is a terrifying story of what happens when you’re accused of a crime and no one believes you are innocent.

I do love Mark’s books he tends to write stories that are different to the norm so I was very excited to read this.  The story is told from the perspective of the Hillock family which makes a change from the usual detective stories as the police take a minor role.

I wasn’t disappointed the book starts with the violent murder that sets the scene and gets the adrenaline pumping and from then on the reader is taken on a bumpy ride full of twists and turns and red herrings all the way to the jaw-dropping ending.

It took me a while to work out where the murder in the prologue fitted in to the story but all was to be revealed as events unfolded but I was totally unprepared for the truth when it was revealed.  The identity of the murderer did cross my mind on occasions but was soon discarded as being very unlikely so the intrigue and suspense continued to build all the way through.

Mathew is brain damaged but is very much loved by his family.  He has a premonition that something bad is going to happen but nobody takes him seriously.  He sees a young girl on her way home from running an errand but they suffers a fugue and is missing a few hours of time.  A few hours of very critical time.  Where did he go?  What did he see?  What did he do?  These are questions nobody can answer.

I love Mathew  I think the author has skilfully created a character that portrays the difficulties and issues that affect the brain damaged sympathetically and realistically.  The other characters are also of the same calibre with there own individuality.

An excellent read from a very talented author that will appeal to readers of crime fiction.

Mark lives in a small village in the lovely county of Cumbria, although his books are set in Oxfordshire where he was born and raised.

After being widowed and raising his two daughters, Mark finally took the plunge and self-published two books on Amazon, The Revelation Room and The Eyes of the Accused.

He’s always had a keen interest in writing, and is extremely proud to have had seven novels published by Bloodhound Books. His latest novel, The Last One To See Her will be published 4th June 2020.

When he’s not writing, Mark can be found playing guitar, reading and walking.