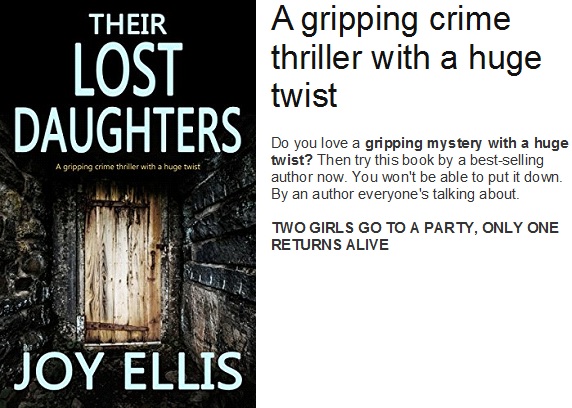 TWO GIRLS GO TO A PARTY, ONLY ONE RETURNS ALIVE
Toni, the surviving teenager, is found delirious, wandering the muddy fields. She has been drugged and it’s uncertain whether she’ll survive. She says she saw her friend Emily being dragged away from the party. But no one knows who Emily is or even if she’s still alive. . .
Meanwhile the drowned body of another girl has been found on an isolated beach.
And how does this all relate to the shocking disappearance of a little girl nearly a decade ago, a crime which was never solved? The girl’s mother is putting immense pressure on the police to re-open the high-profile case.
EACH ONE OF THEM IS SOMEONE’S DAUGHTER AND THE POLICE MUST GIVE THEIR FAMILIES JUSTICE AND CLOSURE
DI Rowan Jackman and DS Marie Evansof the Fenland police are stretched to the limit as they try to bring the perpetrators of these shocking crimes to justice.
There is evidence of an illegal drinking club run by a shadowy group of men, who are grooming teenagers. And the team come across a sinister former hospital called Windrush which seems to house many dark secrets.
Full of twists and turns, this is a crime thriller that will keep you turning the pages until the shocking ending.

THE DETECTIVES DS Marie Evans lost her husband in a motorbike accident and has personal connections to the case. DI Jackman leads the team. He is extremely smart and has a knack for bringing out the best in his diverse team.

This is the first book I have read by this author and is book 2 in the series. I like to read books in sequence and especially like to read the first book as this is when most of the character building takes place. However, this book does work very well as stand-alone and although I felt I had missed out on some of the history to the characters it didn’t spoil my enjoyment of the book.

The story starts with a dead girl case landing on the desk of Rowan Jackman and then a cold case is added into the mix which leaves Jackman and Evans juggling cases. A situation made much worse when another case involving a missing girl is handed over to Jackman’s team by another branch of the Police Force. To make matters worse while they are collecting the information for the case of the missing girl another linked case is brought to their attention.

The action starts from page 1 and the author makes a brilliant job of moving all the cases forward in such a way that the reader finds it very easy to follow where they could have become confused. There are many twists and turns throughout the book and the suspense is building all the time.

I can say, with complete honest, that this is one of the most gripping and adrenaline pumping books I have read in a long time. Cases involving children always tug at the heartstrings and this book does plenty of pulling as the separate cases are all brought to their mind blowing conclusions.

There are many characters involved and they are all complex characters that the reader gets to know throughout the book. Heartbreakingly realistic as many issues are examined. There are corrupt members of the force and mothers looking for a lost daughter for years without giving up hope, traumatised children and heinous crimes all thrown into the mix sorted out and laid out for the reader in an awesome book that will stay with the reader for some time to come.

I am looking forward to more from this author.

Thank you to Joffe Books who provided me with a free copy of this book in return for an honest review.

Joy Ellis grew up in Kent but moved to London when she won an apprenticeship with the prestigious Mayfair flower shop, Constance Spry Ltd.
Many years later, having run her own florist shop in Weybridge, Ellis took part in a writer’s workshop in Greece and was encouraged by her tutor, Sue Townsend to begin writing seriously. She now lives in the Lincolnshire Fens with her partner Jacqueline and their Springer spaniels, Woody and Alfie.