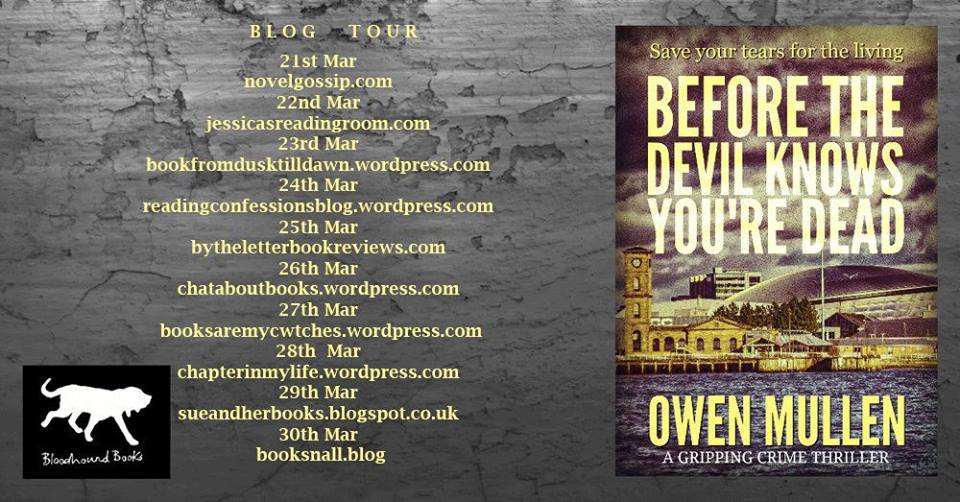 Before The Devil Knows You’re Dead by Owen Mullen

Just another case for Glasgow PI, Charlie Cameron, until he discovers there is more to Law and his disappearance than anyone imagined.

Wallace Maitland, the surgeon responsible for leaving a woman brain-damaged may have abandoned his sacred oath and become a killer. Did the hospital which refused to accept responsibility for the tragedy have Law silenced permanently? Or, with his wife little more than a vegetable, has David Cooper, believing he has been betrayed yet again, taken justice into his own hands?

Charlie comes to realise the world of medicine can be a dangerous place.
Across the city, East End gangster, Sean Rafferty is preparing to exploit the already corrupt city council in a multi-million pound leisure development known as Riverside. The project will be good for Glasgow. But not everybody is keen to work with Rafferty.

With more than money at stake, Sean will do anything to get his way. His motto, borrowed from his old man, is simple. Never take a no from somebody who can give you a yes.

If that means murder, then so be it.

Charlie has crossed Rafferty’s path before and lived to tell the tale.
He may not be so lucky a second time.

This is book 3 in the Charlie Cameron series and having read the previous books I was very happy to read this one.

Charlie Cameron  is a private investigator with a big heart.  His character has grown throughout the books and I feel I really know him now.  He has an extraordinary skill for finding lost people and has built a business out of it.  Unfortunately trouble seems to follow Charlie where he goes and is probably very lucky to still be alive especially since he has got on the wrong side of a gangster.

He is helped in his searches by Pat who is a very unique character, a lovable rogue with exceptional people skills that enable him to extract information for Charlie that otherwise may not be possible.

DI Andrew Geddes also plays a big part in the books as a policeman he is able to provide Charlie with information and has been known to be in the right place at the right time.  In this book Andrew is having problems with the new DCI and is considering retirement which means Charlie becomes a counsellor along with his other tasks.

There is a lot going on in this book so much that at times it gets a little confusing.  A man going missing puts into motion a series of events that brings Charlie back under the Gangster’s radar.  He had a lucky escape once maybe he wont be so lucky this time.  Pat and Andrew have problems of their own and Charlie has love life issues.  As always everything comes together in a totally unexpected ending.

Another excellent book I am hoping to read more about Charlie in future books.

I was provided with a free copy of this book in return for an honest review.

When he was ten, Owen Mullen won a short story competition and didn’t write anything else for almost forty years. In between he graduated from Strathclyde University with a Masters in Tourism and a degree in Marketing, moved to London and worked as a rock musician, session singer and songwriter, and had  a hit record in Japan with a band he refuses to name; on occasion he still performs. He returned to Scotland to run a management consultancy and a marketing agency. He is an Arsenal supporter and a serious foodie. A gregarious recluse, he and his wife, Christine, split their time between Glasgow – where the Charlie Cameron books are set – and their villa in the Greek Islands.