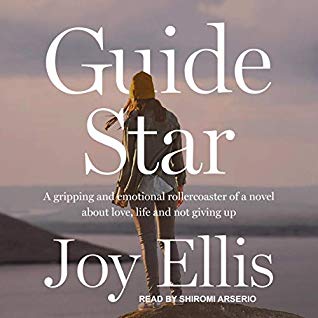 I have been reviewing books on my Blog for several years but I had an idea and that is to roll out audio reviews which I think may be beneficial to visually impaired ‘readers’. So with that in mind I picked up my first audiobook. Now way back when I first began Social Media promotion my first step in the water was GUIDE STAR so as that book has recently been released in audiobook format it was a no brainer that it should be my first audiobook. So initially this post is in standard format but it will be followed up with an audio post to coincide with the launch of my podcast so watch this space.

Stella won’t give up, but she doesn’t know how to go on.

Stella North, a rising star in the police, has her life torn apart by a gunman’s bullets. She has often faced danger, but these injuries mean she must give up the job she loves. Her grandmother Beth is her rock. And Beth is no ordinary woman. At 70, she runs marathons and has a past that Stella knows very little about.

Beth calls in her friend, Michael, to help with Stella’s recovery. But this man means a lot more to Beth than she reveals. And Stella’s ex-husband, Edward, and old police partner, Robbie, want to help, but Stella puts up emotional barriers, and they have problems of their own. Her old friends from her days of Urbex (exploring old abandoned buildings) offer a glimmer of hope for the future.

My very first audiobook and by default my first audiobook review so I will start by saying I don’t have anything to compare it to so this is completely unbiased and my own personal opinion.

Stella is a successful detective, happy with her life until she wakes up in hospital. She is lucky to be alive but was shot in the head and side so she has brain damage and a long road to physical recovery and an even longer one to mental wellbeing.

Her life as it was is in shreds she can no longer do the job she loves and is mad at the world. Taking it out on her friends and family is not helping. At her wits end Stella’s grandmother. Beth, picks up the phone and rings the one person who may be able to help but the one person who will crack open the break in her heart. But she will do anything for Stella.

As the tag line says this book is an emotional rollercoaster but not so much in the romantic sense. It follows a young woman’s struggle to rebuild her life and it is told with such compassion and knowledge it had me in tears at times and smiling at other times.

As Stella struggles to find the way forward she contacts her old Urbexing friend, Tom. Now urbexing is something I knew nothing about so I was immediately drawn in to learn more. Photographing decaying buildings to capture something that will be slightly different every time is, I felt, amazing. The idea of having a physical record of wonderful old buildings preserved for future generations must be so rewarding and this brought a new level of interest to the story.

I loved the narration I think the narrator ‘got’ the accents perfectly especially Michael – not German not English but something that worked perfectly. Also the other characters each voice slightly different. I thought it all worked brilliantly.

View all my reviews on Goodreads